disease
by admin
Very often people are faced with such a problemas skin redness from exposure to sunlight, which arises not from the fact that they were sitting in the sun for a long time. These symptoms are typical for such illnesses as photodermatosis. About this disease, and our website will tell his readers.

Very often people are faced with such a problemas skin redness from exposure to sunlight, which arises not from the fact that they were sitting in the sun for a long time. These symptoms are typical for such illnesses as photodermatosis. About this disease, and our website will tell his readers.

Photodermatosis - a skin reaction to sunlight exposure, which arises as a result of the influence of external or internal factors. In life, it has many other names, for example, allergy the sun, fotodermatit, solar urticaria, andother. Insidious this disease is that it is difficult to define yourself as in most cases it looks like a simple sunburn, and other symptoms can easily be confused with any disease at all. 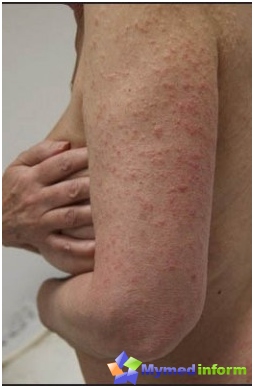 The most common signs photodermatosis - is:

As the name "sun allergy" can beto think that the sun's rays can actually cause allergic reactions. However, doctors rush to dispel this myth, because it is just the name of the disease, and in the rays themselves do not have any substance that can cause allergies. In fact, they only provoke the development of symptoms, as the cause may be either internal changes in the human body, or external agents.

So, fotodermatit exogenous (external) - Caused by human useno cosmetics, perfume and other products, which contain substances that react badly to the sun. For example, as part of sunscreens and lipsticks can contain eosin, para-aminobenzoic acid, retinoids, salicylic acid, sandalwood, mercury preparations or phenols, which cause an allergic reaction when exposed to sunlight.

Fotodermatit endogenous (internal) - Occurs on the background of internal diseases. It may provoke disruptions of the adrenal glands, liver, kidneys. Also plays a role here, violation of other metabolic processes in the body, decreased immunity, the body's total gauntness.

In addition, solar allergy can manifest itself as a result of the use of specific groups of medicinesIn side effects that stated "may cause photosensitivity." For example, it may be antibiotics, Oral contraceptives, antihistamines, chlorpromazine, cytostatics and other substances. Incidentally, ibuprofen and aspirin well here it is.

Yet it is believed that it may be a source of some productsEspecially citrus fruits such as mandarins, grapefruits or oranges. Be attentive to him and, if possible, do not eat them before going out.

The good news is that photodermatosis - it. rather singular phenomenon, rather than a chronic disease. And because it usually occurs once, and then only need to adhere to the basic rules of behavior under the sun.

However, if you know that carry the disease, I recommend readers MirSovetov take such preventive measures: 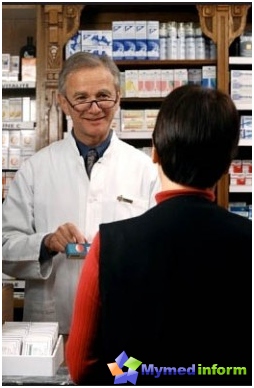 If you are still faced with photodermatosis,to start can use any means at hand. For example, to attach to the damaged place of cabbage leaves, raw cucumber or potato, these products help to cope with itching and remove redness.

From medicines is better to use an ointment containing lanolin in their composition, panthenolZinc or methyluracil.

It so happens that manifests itself not photodermatosisimmediately, and within a few hours after exposure to the sun (even after 32 or 72 hours). One of the rare cases when a person reacts not only to direct sunlight, but even covered with a red rash in the room, well lit by the sun through the window. In this case, it makes sense to consult a doctor who will help determine the true cause of its occurrence.

As we have said, it may be caused by internal disorders, and therefore treatment photodermatosis will primarily depend on the treatment of the underlying disease that can not be done alone.

Therefore, if in any doubt that youstill some problems in the body, consult a dermatologist, allergist or immunologist. They can even assign a special hormone cream that quickly remove external signs photodermatosis.

And in any case, we should not think that if you have itYou manifested once, then you will never go out in the sun. Yes, in very rare cases, the disease is repeated again and again, but this is very rare and requires special treatment. But as a rule, one course of treatment photodermatosis can get rid of the disease once and for all.

If photodermatosis run, it can causeeczema to develop. So, try to make sure that the behavior of your skin after sunbathing and in which case, do not hesitate to visit a doctor. Adhering to the simple rules, you can easily prevent the occurrence of photodermatosis.