medicine
by admin
When a person's kidneys partially (or fully)They lose their ability to form (or output) urine, this pathology is called kidney failure. It is accompanied by the development of serious disorders of acid-base, water and salt, osmotic homeostasis. All this is fraught with secondary damage of many body systems. In such cases, often prescribed Lespeflan. 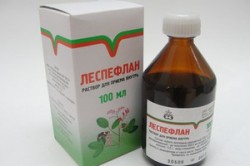 Lespeflan - domestic drugdrug release which is engaged CJSC "Farmtsentr VILAR". The manufacturer receives a water-alcohol solution, based on a purified extract made from legume sprouts, called two-color lespedeza. A few words about this plant. This is a beautiful shrub, which occurs in nature in the south of the Far East, in China, Korea and Japan. A first described this shrub has been in North America. Therefore, the name of the genus lespedeza was given in honor of the Spanish Governor, actively helps botanists study plant in Florida.

In addition to the extract of the drug lespedezaincludes purified water, 95% alcohol concentration, anise oil. The resulting solution was packed in 100 ml bottles of dark glass. This fluid can have color from light brown to reddish-brown, with an orange tint. There is a peculiar odor. During a small precipitate may appear at the bottom of the storage - it is quite acceptable. 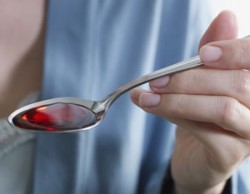 vial of liquid consumed three or fourtimes a day and from one to three teaspoons. The preferred a measured amount of stir in half a cup of plain water and then drink. If the disease is difficult, the doctor may recommend a loading dose of four times a day for four (or even five) teaspoons. Standard course lasts for 21-28 days. Sometimes, if necessary, the physician extends it for another two weeks. After three weeks of treatment are allowed to repeat. Then the patient can be transferred to maintenance therapy. It will be enough to take the drug once a day (in the morning) by teaspoonful. Admission is carried out 15 days in a row, followed by a 15-d-old break ...

Although this drug is promoted from a plant extract, it can not be used when:

Not assigned Lespeflan and those patients whose age has not reached the age of eighteen.

Now MirSovetov warn readerspossible adverse events. Most of them are due to the fact that in the preparation high ethanol content (obtained that day for a patient is forced to take from three to twelve grams of pure 95% alcohol). Sometimes after taking the medication, patients complain of drowsiness, arrhythmia, Palpitations, psychomotor retardationreactions. If you are very concerned about this kind of undesirable effects, tell your doctor. It may reduce the dose or you translated to another drug. Due to the presence of ethanol Lespeflan not recommended for drivers and people whose profession requires quick response, attention.

Sometimes medication takes a lot of sodium in the body, so there is a risk of hyponatremia. It occurs in most cases without bright symptoms. Particularly sensitive patients still say headache and weakness. And yet, if hyponatremia is detected in a laboratory, sodium solutions can be prescribed. Whether or not to discontinue the drug is the decision of the doctor who observes you. Allergic reactions when taking Lespeflan have been seen in isolated cases. If allergy Yet there was, the appointment of the drug should immediately be discontinued. 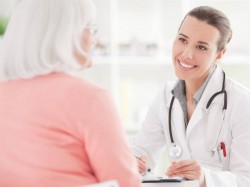 Lespeflan can not be used together with those drugs that depress the nervous system, or their effect will increase.

Lespeflan can not appoint diabetes, It is incompatible with insulin or hypoglycemic (antidiabetic) drugs used inside.

Joint reception Lespeflana and means capable ofdisulfimiramopodobnuyu cause a reaction can lead to very unpleasant consequences. These drugs are metronidazole (Trichopolum), Ceftriaxone, furazolidone and others. These drugs are not compatible with alcohol, however if they still need to assign a patient, the technique relies Lespeflana stop for at least three days prior to the above treatment drugs.

Keep Lespeflan should be in a dark place that is inaccessible to small children and persons suffering from alcohol addiction.

Many patients are positive aboutLespeflane reporting that they have on patients receiving the drug improves health, analyzes come slowly back to normal, disappear edema. Of the minuses patients referred to the high cost of treatment and the presence of large doses of alcohol in this preparation.