The use of paracetamol

medicine
by admin
Paracetamol for decades widelyIt used in all countries. Well-publicized Efferalgan, Panadol - this is well familiar to us Paracetamol. Able to shoot any pain (toothache, headache, migraine, pain in burns and injuries) and has a very good antipyretic effect. 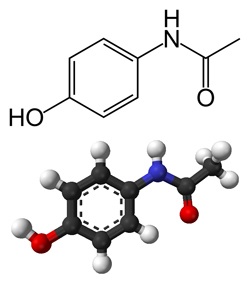 Paracetamol (international name -acetaminophen) for more than one decade, is widely used in all countries. Well-publicized Efferalgan, Panadol - this is well familiar to us Paracetamol. this drug is hiding under what other name? Dofalgan, Tylenol, Paratset, Kalpol, Akamol, Meksalen, Dolomol, Volpan, Opradol etc. At the same amount of paracetamol many different names as dosage forms: in the form of conventional tablets, syrups, elixirs, capsules and solutions, and also ampoules for injection.

Paracetamol can be easily purchased at any pharmacy. Due to the fact that the drug is released without a prescription, many believe that paracetamol is very safe for the human body. Let's see: is this true?

The use of paracetamol

Paracetamol is able to take any pain (dental, headache, Migraine, pain for burns and injuries) and has a very good antipyreticEffect. It is important that Paracetamol is well absorbed: entering it into the blood via the gastro-intestinal tract takes place in a relatively short time, in the region of an hour.

Medium refers to a non-steroidal(Non-hormonal) anti-inflammatory drugs. But these last few years studies have suggested a very low, insignificant anti-inflammatory effect, therefore, it is not necessary to think that long-term treatment with paracetamol can be carried out.

And most importantly, remember that Paracetamol relieves symptoms but does not cure themselves the cause of pain and fever. 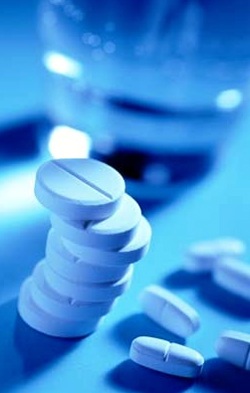 Medications based on paracetamol should be takenafter eating, drinking plain water, you can not drink coffee Paracetamol and other caffeinated beverages, because it can enhance the negative effect on the liver.

Normally, if no special prescription, Paracetamol take a single dose of not more than 0.5-1 g, up to four times a day.

In the treatment of children should be especiallyattentive, and in any case not to engage in self-administered doses, and strictly follow the doctor's instructions. Treatment should not exceed two or three days. our website recalls that children under 3 years of age to take Paracetamol is not recommended.

Be sure to inform your doctor about availablechronic diseases and Prima any other drugs. Despite the fact that paracetamol has minimal interaction with other drugs, nevertheless it should be excluded when taking certain medications, such as sodium valproate (Depakinum, Konvuleks) or barbiturates. 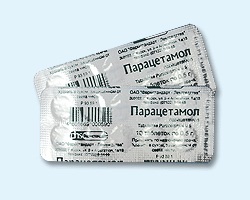 Let's talk about the safety of paracetamol, its possible adverse effect on the human body.

The most famous and common complication when takingParacetamol and preparations containing it - it's liver, it has a toxic effect on the liver, and taking high doses can be fatal. Paracetamol is the most common cause of acute liver disease. You should always be aware of this complication and to carefully select the dose, to eliminate the possibility of overdose. If you have any problems with the liver (cirrhosis, hepatitis, etc.), it should be completely excluded paracetamol treatment.

People with asthma before you applymedication, you should consult with your doctor, as Paracetamol enhances bronchospasm in patients with sensitivity to acetylsalicylic acid and other nonsteroidal anti-inflammatory drugs.

Experimentally it has been found that high doses paracetamol, it is able to influence the endocrine system (thyroid function inhibits).

There is no evidence on the effect of paracetamol kidneysHowever people having some irregularities inthese bodies, it is necessary to consult a doctor before use, as the effect of the drug can be unpredictable. Renal failure in excess doses paracetamol is observed in approximately 12% of cases (most people who use alcohol are at risk).

It is believed that can be used in Paracetamolpregnancy and lactation, the possible damaging effect on the fetus is no information. But our site still would not recommend it be forgotten that during such periods with extreme caution should be taken to the reception of any medicines. 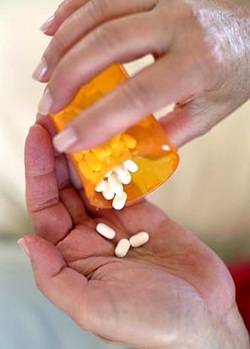 So, we found that people with severediseases of the heart, liver, kidney and respiratory tract need to be careful in the treatment of paracetamol. But mostly complications of paracetamol overdose still arise in the liver - is necrosis of the liver, often with fatal consequences.

Particular care should be manifest in the selection of the required dose of the drug. Complications may occur at a relatively low dose of 5-6 g

Paracetamol - a one-off preparation, it can not betaken regularly, but only when there is this urgent need. If you get sick, you have a high fever, pain, Paracetamol is suitable to you only as a temporary measure to wait for the doctor. If you do decide to be treated with paracetamol alone, remember if treatment has no positive effect, it is a chance for immediate treatment in a medical facility.

We wish you health!