medicine
by admin
Almost all newborns from time to timevery concerned about the discomfort - intestinal colic. To help crying crumbs can carminative means for improving the discharge of gases, accelerating their exit from the intestine. Many mothers in such cases to infants Sab Simplex.

How to understand what exactly colic deliverconcern for the child? He constantly screams from pains in the intestines, and his small tummy increases in volume, becomes very hard and looks like an elastic ball. With colic in the intestine, gases are intensely formed, they literally burst its walls, causing concern to the small creature. In some children, this problem appears in the fifth week after birth, but in others - the first colic makes itself felt even while staying in the maternity ward. There is one more trouble characteristic of infants. When newborns suck their mother’s breasts or get food from a baby’s bottle, many of them swallow air. And then regurgitation occurs, arises hiccough. That concerned parents question - whattake to relieve the state of the baby? Moreover, the method of treatment should not cause any harm. Turning to the pediatrician, they receive a recommendation - to give the newborn a drug called "Sab Simplex". 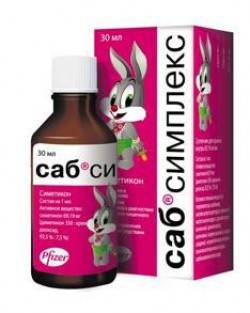 This product is manufactured in France. It is slightly viscous suspension structure, which has a white (sometimes gray-white) color and distinctive smell of raspberry and vanilla. It prepacked it to 30 mL vials, dropper made of dark glass. The active substance in the intestine which reduces the formation of large-sized gas bubbles is simethicone. This silica gel, foaming pacifying. It can be seen as a part of funds from heartburn, and creams used to get rid of pressure sores, diaper rash. In preparing the suspension using excipients: sodium citrate dihydrate, carbomer, hypromellose, citric acid monohydrate, sodium cyclamate, sodium benzoate, sodium saccharin, sorbic acid, esters poliglikostearilovoy acid, water and two flavoring (raspberry and vanilla).

One milliliter of the slurry contains about 25 drops.

How does Sab Simplex?

This tool is referred to the group of medicines that reduce the flatulence. Once in the stomach and the mucous contentintestinal tube, simethicone reduces the surface tension of the gas bubbles formed there. There is destruction of these bubbles, and is released when the process gases are absorbed intestinal wall or evacuated during peristalsis.

The drug is completely safe for the treatment of colicBecause it is not absorbed into the bloodstream andthe intestinal wall, no effect on other organs. You can use it for a long time, no it does not cause addiction. Displayed it in an unmodified form, along with stool.

It is used not only to kids, but kids moreolder children and adults before the ultrasound, esophagogastroduodenoscopy and radiography. Sab Simplex alerts when these studies the interference and overlapping images. It was found that the drug promotes better irrigation contrast medium of the mucous membrane of the large intestine and prevents gaps formed contrast film. Foam is removed ( "quenched") in a physical way, with no chemical reactions.

How to apply Sab Simplex? 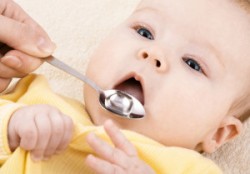 Infants and toddlers up to the year-oldage should be given 15 drops of suspension before each feeding, you can otkapal medicine and before going to bed at night. This tool is easy to dissolve in liquids, it can be diluted with milk or water (boiled). If the baby feeding bottle, drip the medicine in it (in the infant formula). Sab Simplex is permissible to give pure, otkapyvaya desired number of drops directly into the mouth kid (if you succeed). Bottle equipped with a convenient dropper, so no overdose does not happen. Before digging actively shake a bottle, and then turn it upside down and tap on the bottoms, then the medicine will go into the pipette. our website mentioned that the drug is given not only to the newborn, therefore, explain how much medication is necessary to give older kids and adults:

The best time for the reception - it during or immediately after a meal. This drug can be used without fear of women, both during pregnancy and during lactation.

But how to prepare for diagnosticdigestive tract research. To prepare for the radiography procedure, the day before the appointed date in the evening, take from three to six teaspoons of the drug. If there is an ultrasound, then in the evening the day before the procedure, take three teaspoons of this suspension and three more teaspoons three hours before visiting the ultrasound room. Before endoscopy, Sub Simplex should be taken in an amount from half to a teaspoon. If necessary, at the time of the study, a specialist can additionally administer the drug through an endoscope.

More Sab Simplex are used in poisonings different detergents. The minimum dose in such cases - a teaspoon, but it can be increased (it depends on the state of health of the victim). 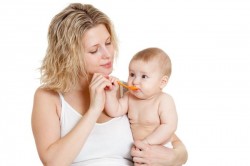 The drug should not be given if:

Usually the drug is well tolerated. Yet sometimes allergic reactions may occur due to the presence of some auxiliary components in the slurry. If parents give Sab Simplex newborn baby is very common, that is, the risk of constipation.

Duration of individual suspension. And if a few days the baby good health, he is willing, with appetite eats and sleeps peacefully, the reception of this facility is possible and cancel.