medicine
by admin
The doctor assigns you warfarin. And warns of the need to control some of INR, which involves frequent visits to the clinic, blood pass, then to the doctor. In my head there are thoughts like "here, another tablet", "so much trouble", "and whether or not to take it, I'll manage somehow ..."

So what kind of drug - warfarin? 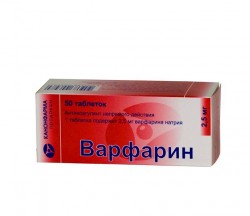 Warfarin belongs to a group of anticoagulants - drug reduces clotting (coagulation) of blood.

Blood coagulation - a complex multi-stagea process normally aimed at stopping blood loss in an injury by clogging a damaged blood vessel with a clot - blood clot. However, in some situations and diseases, blood clots form without traumatic injury and cause circulatory failure (or complete cessation of blood flow, if the vessel is large, main) in the organ or part thereof. If a similar situation occurs in the vessels of the brain, then this is a stroke, in the heart - a heart attack. Often blood clots do not form in arteries with a high blood flow velocity, but in veins (for example, of varicose veins, Thrombophlebitis) where the blood flow rate is less then "rip" and transferred to the above, in the vital organs. In this case, doctors say thromboembolism.

As you know, the best treatment - is prevention. Warfarin is assigned just for the prevention of life-threatening thrombosis and thromboembolism: heart attacks, strokes, Pulmonary embolism (PE), etc.

Diseases in which you need to take warfarin

In this situation, warfarin is assigned temporarily toexacerbation of time. Blood clots in the veins of the lower limbs fall in pulmonary artery - pulmonary embolism develops. If the cluster is large, it occludes the artery is large, it leads to switching off a considerable part of the light and shock.

The mechanism of action of warfarin 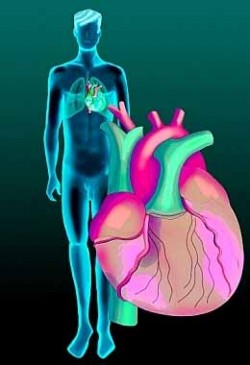 Receiving Warfarin prevents formation of blood clots in people with a high degree of risk.

How should I take warfarin?

In one tablet of warfarin - 2.5 mg. There is a rather difficult point in dose selection. It is strictly individual for each person. There are no two identical people and there is no “average” dose of warfarin. Selection can be carried out by a doctor both in the hospital and on an outpatient basis, and this process requires an active understanding of the purpose of treatment and patient participation.

A goal warfarin - prolong your life in good quality.

Usually start with 2 tablets (5 mg). This drug must be taken at the same time of the day (preferably in the evening) and not to miss a dose.

How to monitor the effectiveness of treatment?

Unfortunately, there is not possible to rely on yoursensations, laboratory monitoring is required. This means that you need to take a blood test for clotting. Doctors are now using an indicator such as the INR (international normalized ratio). Despite its name, is nothing "wrong" is not - it's clotting time corrected for the sensitivity of the reagent.

When receiving warfarin there are so-called"Therapeutic range" - INR of 2 to 3 or 3.5 units. in some cases. This corridor must be followed: thus ensuring the maximum effectiveness of the drug, and minimal risk of side effects. What is the value you'd better stick to - the doctor decides.

By reducing the INR below 2 - no complications andno good, clots will form, ie, warfarin is meaningless. If above 3.5 - blood clots will not, but inhibited clotting too much and there is a risk of complications.

What complications can be?

In the first place - is a risk of bleeding. Severe, life-threatening bleeding occur rarely, usually when the patient has no control over INR regularly or accidentally takes too much amount of the drug, or he has hereditary changes enzymes (weakness), destroying warfarin.

We must be attentive to himself and should consult a doctor if you feel significant changes in health.

What should alert you?

When these symptoms be sure to consult a doctor! Remember: you have to keep the INR within the 'corridor', the deviations in the one and the other side can be dangerous! 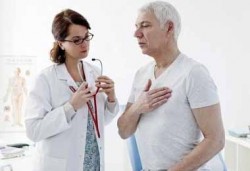 How often it is necessary to monitor the INR?

In the beginning, the selection of doses you will oftendonate blood: every 2-3 days, as the effect of Warfarin develops within two or three days, reaching a maximum of about 5 days. If within 2-3 measurements INR remains within your target value, the dose can be considered as selected. In the future you will give blood once every 2 weeks, then once a month. Unfortunately, so frequent visits to the clinic - an urgent need.

There are portable devices forINR self-determination in the home, like glucometers, - "Koagulochek". Of course, it is much more convenient, but these devices are quite expensive, in the range of 10-15 thousand rubles. Accuracy them high.

What else you need to keep in mind?

INR - figure, prone to fluctuations, evenif you take the designated number of pills regularly and on time. Its level is affected by many factors: diet, alcohol intake, condition of the liver and kidney function, treatment with other drugs.

Enhances the effect of warfarin:

Reduce the effect of warfarin:

Dietary supplements and herbal medicines also affect the action of warfarin in one direction or another.

Be sure to consult with your doctor if there is a need to accept the above-mentioned or other drugs!

In conclusion, we can say that warfarin -a drug that requires a careful and responsible attitude, and control of INR can be a bit troublesome. But warfarin - is the gold standard (and economically affordable!) The treatment of thromboembolic diseases in our country, and abroad, he saved many lives. In the appointment of warfarin number of heart attacks, strokes, pulmonary embolism is reduced by 63-75%. And it is worth a little "tinker" with him.