Gynecology
by admin
The development of cervical cancer directlyIt is a kind of staging. process is not rapid in many cases. However, if left untreated for a sufficiently long time there is its further development: from preinvasive carcinoma and ending the spread of tumors to the bladder, rectum with distant metastases. 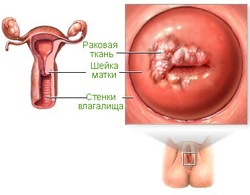 Recently, quite a sensational topic infield of genital tumors became part of human papilloma virus (HPV) as a provoking factor in the development of malignant tumors of the cervix. Create a vaccine, which experts advise to vaccinate girls with steady menstrual cycle, but has not started yet sexually active. It is about the age of 12-13 years. Although some scientists to extend the terms of 20-24 years. That is, until the moment of infection with the virus through sexual contact.

Unfortunately, the actual value of the vaccine can be assessed not before 20-30 years. Vaccinated women will enter the age at which begins most often develop cervical cancer.

And at the moment we are actively being developed theories about the specific roles and herpes simplex herpes second type (genital). While supporters and opponents were evenly divided frank. The first attempt to prove the connection of the virus, and tumors of the sexual sphere, and others - quite rightly say that if we consider provocative herpes factor of the second type, then the chicken pox, and cytomegalovirus infection, belonging to the same family, should be considered as important provocateurs.

Either way, a woman who was diagnosed with "cervical cancer", most likely the last to be interested in the reasons for its existence.

If you start from the beginning, the process of developmentdirectly cervical cancer is a kind of staging. process is not rapid in many cases. All can start with an extensive or not cervical erosionThen in the presence of certain factors (some of them of the previously mentioned) occurs dysplasia epithelium of varying degrees of severity. In other words - a precancer, a condition with proper supervision and treatment in carcinoma (cancer) will never outgrow. 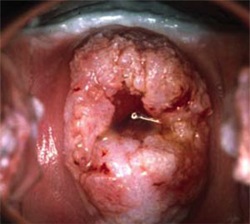 The fact that in place of starting erosionformed epithelium that this unnatural portion. And yet: the transition to dysplasia "carcinoma in situ" takes an average of 3 to 8 years. This means that the epithelial dysplasia smoothly "spilled over" into cancer, but that its shape, which is quite can be treated successfully with a good prognosis.

Even if the classification of cervical canceruse exactly the degree of its prevalence: from preinvasive carcinomas ( "carcinoma in situ") and ending with the spread of tumors to the bladder, rectum with distant metastases.

How to suspect possible development of carcinoma?

Readers of our site should be aware that, like othercancer, cervical cancer can does not manifest itself for a long period of time. Some women may notice acyclic bloody issues against the background of the normal menstruation or bleedingselection of different nature in postmenopausal women. Some women complain of whiter appearance, against which there are contact bleeding after sexual intercourse, pelvic examination, difficulty defecating, physical stress. 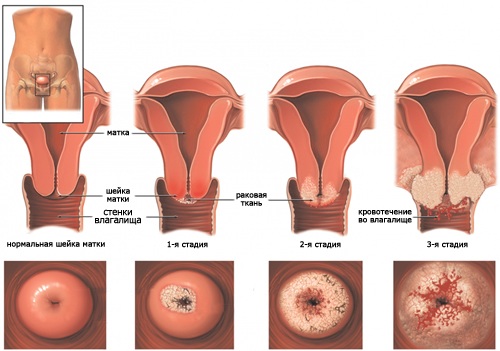 In the later stages, when releasedcancer, can be observed profuse, excessive bleeding, difficulty in defecation and urination, arching pain in the sacral region. All this can be complicated urinary tract infection, constipation.

It would seem: at the present stage in the presence of a large number of devices, ranging from ultrasonic and ending with nuclear magnetic resonance imaging, diagnosis should not pose any difficulties. However, actually it goes up to the contrary. To begin with the woman. According to statistics, only 29% of women regularly visit a gynecologist, 54% have never been in any of the doctor in the last year. Depressing figures. Furthermore, not every gynecologist at the treatment of cervical erosion sends the material for histologicalstudy to confirm that only treats erosion. Quite a lot of women in the histology results do not come. And at the same time, tissue samples of tumor growth, along with the conclusion of stores throughout the existence of the laboratory and can be provided upon request, only need to call the name and approximate date of the study.

So, for women at risk of occurrenceCervical cancer is important not just regular visits to the gynecologist, but also a special survey. The most common is a colposcopy, or more simply - cervical examination at high magnification. When colposcopy also use different reagents, and staining the "place of suspicion", the doctor will be able to more clearly define the further tactics of observation and treatment. And during the procedure it is possible to take a smear and biopsy material for cytological and morphological studies.

Another important method is the ultrasound study, in which you can identify the extent of malignancy neoplasmsAnd navigate to the extent andthe need for surgical intervention. The research was carried out as in the usual way (transabdominal), when the sensor is "lead" in the stomach, and the transvaginal method, when the sensor is introduced into the vaginal cavity to determine the preinvasive and microinvasive cancers (initial manifestations). 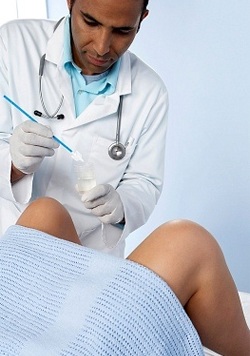 As with the majority of malignant tumors, cervical cancer is treated surgically, radiotherapy, chemotherapy, and use combined methods.

The surgical procedure directlyIt depends on the stage of the cancer. So at stage 0 (preinvasive carcinoma) in women under 49 years held conical cervical amputation, ie Surgeon minimally affects the genitals, trying to keep as sexual and reproductive function. But in women older than 49 years and in patients of any age with uterine myoma or relapse (reappear) preinvasive carcinoma spend a hysterectomy (removal of it) with appendages after conization. This is due to the fact that the presence of both uterine fibroids and tumor recurrence indicates that after only conization possible not only recurrence of cancer, but its rapid progression.

Undoubtedly, taking into account the desire itselfwomen. For example, if her relatives had cervical cancer or they are killed by rapid progression, the woman explained the risks and consequences of minimum intervention. If a pregnant woman no longer plans, and the risk is high, even at the age of 40 years may radical hysterectomy with appendages.

Readers of our site should be aware that after this amount of surgery a woman for life will be forced to take hormones, thereby replacing the absence of ovaries.

So, cancer stage 1 is removed not only the uterus, appendages, but pelvic tissue, the upper third of the vagina, lymph glands. After the operation is performed radiation therapy.

At 2 and 3 stages of cancer is carried out and the usual (remote) radiotherapy and intracavitary.

The results of treatment of cancer

As with other malignanciestumors, the efficacy of treatment of cervical cancer is estimated at five-year survival rate. If the cancer is diagnosed and treated at the 0th stage, the survival rate of 100% on the first stage - 84-87%, in the second - 66-70%, in the third - 39-42%, and 4 th - only 11-13%. Average person (not an oncologist) is not talking about a lot. Therefore, I must say that the figures are huge. It is worth 10 women to "forget" to visit a gynecologist for a few years if they have cervical disease, and five years after treatment for cervical cancer survivors, only 7 remain.

Summarizing: if a woman has cervical pathology, you must at least once in 4-6 months, and be seen by a gynecologist to do a colposcopy. And at the first detection of adverse signs do analysis to determine the human papilloma virus and herpes simplex type 2. If a positive result in the treatment must be enabled, and antiviral therapy.

Be attentive to your health!