medicine
by admin
Very often the companion of colds, acute respiratory infections, bronchitis,cough is lung disease. We all know that the cough is a protective reflex of the body. When inflammation in the airways, bronchial tree, lungs and forms a thick mucus accumulates. Her body perceives in this case, as a foreign body.

It is through the body and tries to coughcleansed of mucus and are there in large numbers of harmful microbes. The faster the body is free from mucus, the sooner will come improvement and recovery, then cough and retreat. It often happens that the mucus has a very viscous and thick structure, a person coughs, and she does not leave, bubbles somewhere deep inside. Here then comes to the aid of medication ACC. Our site has decided to tell his readers about it in more detail. You will learn how the drug, to whom he recommended and in what cases. You will get acquainted with the side effects and be warned that under no circumstances, diseases and this medication can not be used.

General information about the medicinal product 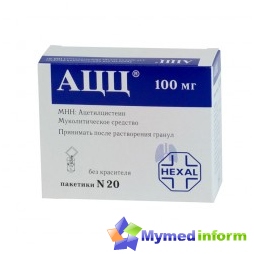 This medicine in recent years is considered one of thethe best remedies to help with coughing, although he has a list of contraindications, conventions, and limitations in the appointment. Given the veneration, fame and positive results, pharmacologists are constantly developing its new dosage forms that are more convenient for patients to use. Therapists and pediatricians prescribe it for almost every third patient who has complained of an annoying cough. The active substance in the drug is acetylcysteine, this formed the basis of the abbreviation - ACC. This chemical compound is a derivative of the known amino acid - cysteine. Getting into a sick body of a person already tired of coughing, it is able to work miracles. In most cases, such patients have very thick and viscous mucus (sputum) in their airways, which prevents the air flow from circulating, constantly irritating the mucous membranes, thereby causing bouts of prolonged coughing. And also such a humid environment serves as a good basis for further reproduction of pathogenic microorganisms. A vicious circle, as a result of which the disease takes a lingering nature. The aggravating symptoms are more and more disturbing, especially at night, of the patient himself and his family. In such cases, acetylcysteine, which is classified as a mucolytic and expectorant, is suitable for the treatment. This group of drugs has the ability to thin the mucous exudate and facilitate its evacuation from the respiratory tract. In addition to ACC, the group of mucolytics includes Bromhexine, Ambroxol, a syrup obtained from licorice root.

How does the medicine?

Acetylcysteine ​​works on thick sputumthe molecular level. This results in the destruction of links between sulfur atoms (they are called disulfide bridges). It is these relationships and confer increased viscosity of sputum. Thanks to ACC secret becomes more liquid and fluid, it is easier to leave the lungs and airways. ACC particles destroy the integrity of the viscous component, known as mucopolysaccharides. Now able to move mucus out on bronchial tree to the side of the mouth. Cough first becomes wetter, productive person spits phlegm. Gradually the cough disappears, performing tasks assigned to it by nature. Acetylcysteine ​​also has antioxidant properties, providing a positive impact on the local inflammatory process that occurs in the bronchi.

When appointed by ACC? 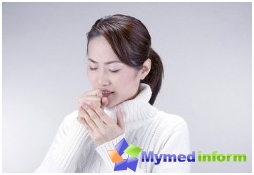 The drug is indicated in all diseases, which are characterized by abnormal accumulation of thick exudate (phlegm) in the lungs, bronchi and other parts of the respiratory system:

At the pharmacy you can meet in the form of sachets ACCgranular powder, effervescent tablets, solutions for injection (intramuscular, and intravenous drip infusion). The packaging next to the point, and the numbers: 600, 100, 200 - this is the number of milligrams of active ingredient in one effervescent tablet or sachet. For example, ACC 100 means that the sachet contains 100 mg of acetylcysteine. If there is an inscription "Long", it means that the dose of acetylcysteine ​​per tablet 600 mg, this amount is taken once a day, the drug has a prolonged (elongated) action. Effervescent tablet or sachet (granular powder) before taking carefully dissolved in 100 mL of water. Children are allowed to use water instead of fruit juice, milk. The fluid may be warm, but not hot. Take ACC better after eating. In days of treatment generally try to drink plenty of fluids, mineral water (for example, "Borjomi") - all this enhances the therapeutic effect of acetylcysteine. And now about the dosage:

Doctors usually recommend a cold drinkdrug for five or seven days. When bronchitis course longer. But in cystic fibrosis doctor individually decides how the patient to take ACC, everything depends on the severity of the condition and form of the disease.

Undesirable effects while taking ACC meet, but rarely. Yet mymedinform.com would call them:

When the drug can not be used? 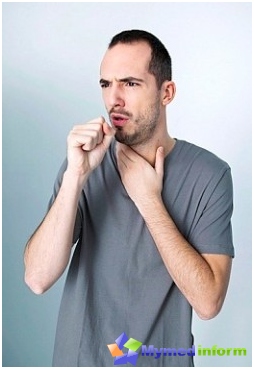 The manufacturer warns that acetylcysteine ​​is contraindicated in the following cases:

Caution is necessary to take the drug for those who suffer from serious disorders of the kidney, adrenal gland or liver, bronchial asthma with hypersecretion.

Data on the effect of ACC on the fetus and the pregnant woman, it is very small, so it is best to avoid taking the drug during pregnancy and while breastfeeding a newborn.

It is not recommended to take simultaneously ACC mucolytic and antitussive, because then there is a risk of stagnation of phlegm in the respiratory system.

If you take nitroglycerin, it should be remembered that the ACC enhances its vasodilator effect.

Incompatible ACC simultaneously with the receptionantibiotics, representatives of groups of semi-synthetic penicillins, tetracyclines, aminoglycosides and cephalosporins. Therefore, when buying an antibiotic prescribed by a doctor definitely ask your pharmacist at the pharmacy from which the antibiotic group. If this is representative of the above groups, between reception of funds and ACC must necessarily pass for 2 hours, then no conflict between medications does not happen.

When buying also pay attention to the fact that the bag can be written, that it is used for making hot drinks. These granules must be dissolved in the hot liquid.

Dissolve ACC should be in glass containers, drugs, avoid contact with metal, is suitable for mixing a small wooden stick or a porcelain spoon.

Here are the properties of such a popular medicine ACC. If you comply with all the recommendations and doses given special instructions, it will improve the excretion of mucus and help get rid of the cough bothers.