medicine
by admin
Such a disease like anemia may show up ina person at any age, from infants to the elderly and finishing. And if it is associated with a deficit such as iron element, it is assigned to a patient a drug composition in which it is present. Today we tell about the medicine, which is called "Sorbifer Durules".

For many people, the term "anemia" is associated withanemia. However, this does not mean that the blood in the body literally little. It may be enough, but the "quality" it leaves much to be desired. Because blood sufferers anemia there is a shortage of high-grade red blood cells (thisstructural elements having red and containing hemoglobin). This hemoglobin is responsible for ensuring that every cell in every tissue of the body is sure to deliver oxygen. When the amount of hemoglobin is low, the tissues and organs in varying degrees, suffer from oxygen starvation, which is reflected in their work. When the body loses iron more than it receives and is absorbed, while developing iron deficiency anemia. 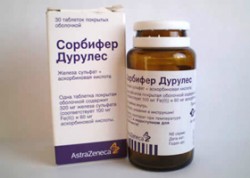 Sorbifer Durules is aa combined preparation containing iron sulfate and vitamin C (ascorbic acid) and belonging to the group of antianemic drugs. The combination of these two components gives a pronounced therapeutic effect. Ascorbic acid significantly increases the absorption of iron in the digestive tube. In everyday life, the medicine is simply called "Sorbifer." The word "Durules" in the title indicates that a special technology is used in the production, which allows iron ions, which then enter the intestine, to be released uniformly and gradually (over six hours) from the drug. This process does not occur under the influence of digestive juices, but during peristalsis, that is, wave-like movements of the intestinal walls. With this release, the probability of a rapid increase in the concentration of iron ions in the digestive system is excluded, therefore, no irritating effect on the mucosa lining the digestive tract occurs. This manufacturing technology allowed approximately 30% increase the absorption of the drug in the small intestine.

Available in tablets in bottles made by50 or 30 pieces. Form round tablets, they are light yellow, coated. On one side there is certainly engraving shaped «Z». If you break the tablet, its interior of gray, has a characteristic odor. 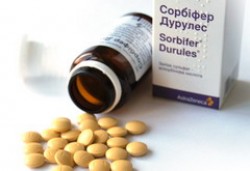 Manufacturers warn this means that it can not be assigned:

Care should be in cases where the drug is assigned to suffering Crohn's disease, Diverticulitis, enteritis (inflammation of the small intestine is), ulcers in the 12-duodenum, stomach or other parts of the digestive system.

In some patients when taking "Sorbifer durules" pain in the stomach area, an unpleasant taste in the mouth, nausea, retching, deteriorating appetite, there were problems with the chair (diarrhea or constipation). Much more rarely, patients complained of other side effects: headache, Weakness, skin rashes and pruritus (due to allergies). It was recorded a few cases, when taking the medicine caused narrowing or ulceration of the esophagus. 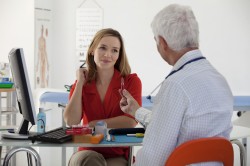 To avoid overdose, glutiron the body, do not take "Sorbifer Durules" simultaneously with other drugs, where iron is present. And the signs of overdose include: reduced blood pressure, weakness, paleness, vomiting, diarrhea mixed with blood, heartbeat, breath odor of acetone, the temperature rise. With a strong overdose may develop kidney or liver failure, as well as the appearance of convulsions, lowering blood glucose, loss of consciousness.

Children are allowed to prescribe medication if they are older than 12 years. Dosage doctor calculates, based on the weight of the patient.

During treatment with drugs containing iron, stool often painted in black color. This phenomenon should not disturb the patient.

This drug reduces the absorption of drugs such as Levodopa, Methyldopa, enoxacin, levofloxacin, Grepafloksatsin, thyroid hormones.

Do not take the drug together with tetracycline, doxycycline, norfloxacin, ofloxacin, ciprofloxacin.

If these drugs are certainly necessary to the patient, the interval between their admission must be at least two hours (and in the case of antibiotics tetracycline - at least three hours).

Iron is absorbed in smaller quantities, if at the same time "Sorbifer" take antacids.

MirSovetov warns that such products andbeverages such as eggs, chocolate, spinach, rhubarb, strawberries, bran, milk (and articles thereof), black tea, coffee - reduce the process of iron absorption in the intestine. Therefore, the interval between the intake of iron-containing preparation and use of these products should be at least two hours.