medicine
by admin
Many parents say that as soon as theygave the kid in kindergarten, soon noticed that he was often colds - the tonsils become red, then a constant runny nose, a cough that will bind. And there is the possibility of periodically taking "sick leave", as all the same to help my child? Today, our site will acquaint readers with the herbal remedy called "Umckalor".

If a child is ill angina and SARS more than four times a year, the pediatrician callsits often sick. The increase in the incidence is recorded not only in kindergartens, but also in school, when children study in grades 1-5. If a student is often forced to skip classes due to illness, he does not adequately absorb important topics, misunderstands, and may become “lagging behind” in school. Such children often lose interest in school subjects, communication with classmates, there is isolation, self-doubt. These guys need special attention. Doctors, first of all, advise strengthening immunity, taking measures at the first sign of respiratory infections. Scientists managed to create a phytopreparation Umkalor, which does not have vivid side effects. It combines antibacterial, antiviral, expectorant properties. There is another important feature of this tool. By acting on the components of the immune system of frequently ill children, Umkalor helps to cope with an infection that has already begun to develop in the body, to prevent and "repel" future "attacks" of infectious environmental agents on the mucous membranes of the respiratory tract. So, Umkalor can cope with a series of respiratory diseases. 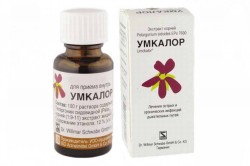 Umckalor Produced in Germany by «Dr. Willmar Schwabe »in the form of drops, which should be taken orally. This clear solution, its color varies from light brown to reddish-brown shades. The liquid is clear, but may be a little blurred, ie opalescence, because it is based on herbal ingredients. For them, small fluctuations transparency - normal, allowable phenomenon. In vials made of dark glass and is equipped with a dropper, maybe 50 or 20 ml solution. Taste nice drops. The main component of the drops is a liquid extract derived from the underground part of the plant called pelargonium sidovidnoy. There Excipients: ethyl alcohol extractant glycerol.

When the first symptoms of SARS start receptionphytoremedy this, it immediately becomes a great "ally" of immunity, together they quickly cope with the "attacks" of pathogenic bacteria and viruses insidious. In addition, there is a marked increase in the properties of the protective mucous membranes lining the respiratory tract. In an extract of Pelargonium researchers noticed a unique ability: it increases the number of oscillations of ciliated epithelium of the respiratory system, so the bacterial cells and viruses can not attach to the cells of the mucous membranes, prevent them from doing it ciliated outgrowths. Umkalor acting in different directions to prevent coldAnd if the person is still ill, the recovery will come soon, do not develop complications. 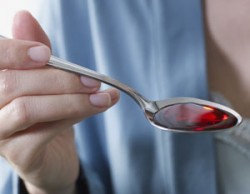 With SARS, rhinitis and various sinusitis, upper respiratory tract infections are advised to take a drop Umckalor inside for 30 minutes before meals three times a day. The optimum dosage (one-time) as follows:

Before you start to dig out the appropriate dose,the first thing a good shake the vial, and then spend the dosage in small amount of water (boiled). When dosing bottle keep in a vertical position, lightly tapping his finger on the bottoms. Store at room temperature cure necessary in a dark place, as pelargonium extract is exposed to light tends to degrade. Therefore, a manufacturer and packs up the solution in a bottle made of dark glass. Once the vial is opened, the solution can be used no more than three months, so indicate on the packaging date of its opening. Duration of the course depends on the diagnosis, the average is ten days. In chronic or frequent repetitions exacerbations Umckalor take longer (in consultation with your doctor). Umckalor can be taken, combining with antibiotics or other anti-inflammatory drugs. But if you are taking anticoagulants (coumarin derivatives), then Umckalor solution may enhance the therapeutic effect that provoke bleeding (nose or gums). 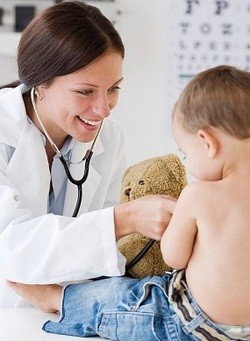 Before buying a product, read the list of situations where Umckalor can not be used:

Umckalor usually well tolerated by patients of all ages. At the manufacturer unknown about his overdose and worsening health.

Clinical studies and opinions of parents indicate that in rare cases when taking Umckalor gave themselves known allergic reactions. Nausea. diarrhea, Pain in the upper abdomen were recorded in isolated cases. More annotation manufacturer warns that caution is necessary to appoint Umckalor in brain pathologies, traumatic brain injury, alcoholism, Problems with the kidneys or liver. Due to the presence of alcohol, medication and care should be those who drive vehicles or other mechanisms that require high care and precision movements.

Umckalor - a modern herbal, combiningStatement immunomodulatory, antimicrobial, expectorant, mucolytic and anti-inflammatory effect. Efficacy proved by numerous clinical studies and observations of doctors for the health of their patients. Now the drug is actively assigned and Russian experts.