medicine
by admin
Increasingly in his vocabulary people use suchwords like "stress", "slagging of the organism", "dysbiosis", "an imbalance in metabolism," "weak immune system." These conditions are different, but they have a common causal factor - a modern style and a way of life, in which among the worries, hassles, worries and anxieties people cuts out free time to engage in their health.

Increasingly in his vocabulary people use words like "stress", "slagging of the organism", "dysbiosis", "imbalance in metabolism", "weak immunity". These conditions vary, but they have a common causative factor - a modern style and lifestyle, in which, among worries, fuss, troubles and anxieties, people do not cut free time to engage in their health. The rapid pace and rhythm of life worsens our health. The body tries to give us signals so that we pay attention to ourselves. These first “alarm bells” include dysbiosis. It leads to other problems - allergies,skin diseases, impaired stool and digestion. So how do you deal with dysbiosis in order for the intestines to function properly? There are a lot of drugs at the moment. One of them is Lactofiltrum. Today, readers of our site will learn the details about it - how to apply, what is included, are there any side effects and how does it differ from other medicines. 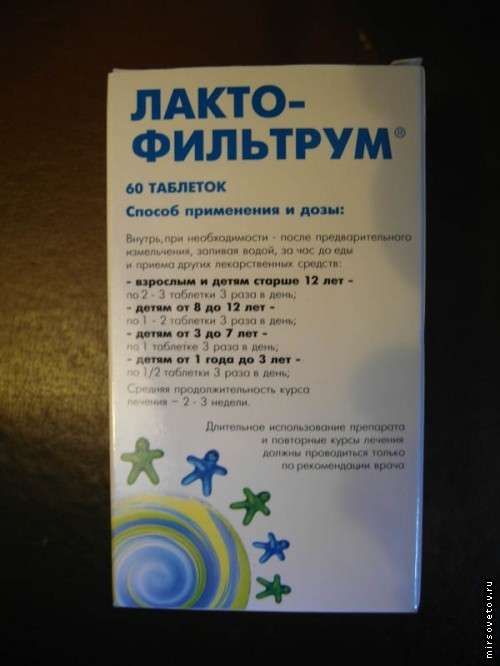 The composition and the description of the drug

Laktofiltrum (lat. Lactofiltrum) refers to a group of sorbents having a vegetable origin. These funds are used for detoxification at various poisoning, the treatment of allergies and create proper microflora in the gut. It produces this means a Russian company JSC "ABBA RUS" in the city of Kirov. Tablets have kapsulovidnuyu, a lenticular shape with the notch in the middle. Color them brown, you can see white or grayish blotches. In the package is 30 or 60 tablets described.

Let's see how the action has a dosage form?

Lignin is an organic compound obtained inthe result of hydrolysis of wood. It is able to penetrate the intestines, attract everything negative, bind, neutralize and hold toxins, salts and compounds of heavy metals, allergens, alcohol, pathogenic microorganisms, drugs, rot products, harmful substances that get into food, cholesterol molecules, bilirubin, histamine, urea, serotonin - that is, components that are considered the main culprits of endogenous toxicosis developing in the body. Lignin is not absorbed into the blood, does not have toxicity and is safely excreted from the body within approximately 24 hours, having done its positive work. At the same time, there is no effect on secretion and motor function. In a bound form, lignin removes from the intestine all allergens that caused allergy symptoms in the patient. And one more positive fact. Some people note that after a course of treatment with the drug they lost a little weight. The explanation is simple - there was a removal of "heavy" fat and toxins accumulated in the digestive tract.

And now we will talk about why do we need our intestines prebioticsIn particular - lactulose. It was created synthetically, it contains the remains of fructose and galactose. Once in the body, lactulose passes unchanged through the stomach, small intestine and in the colon turns. There, she will serve as a nutrient medium to the normal microflora (bifidobacteria and lactobacilli) was comfortable there and breed in the right quantity. During the hydrolysis of lactulose produced important organic acids such as lactic, acetic and formic actively suppressing propagation and activity of pathogenic microorganisms, warning the occurrence of nitrogenous toxins. All this is very beneficial for good motility and bowel motility, stool normalization.

Although the live bacteria in the product is not, but itremarkably restores microbiocenosis on colonic mucosa. Normalized gradually fat, carbohydrate and protein (protein) exchanges. Getting better absorption of vitamins, trace elements. Fade phenomena characteristic of intoxication and allergies.

Tablets are administered orally one hour before meals orreceiving other drugs. Permissible grinding, if necessary. The drug is washed down with water. Adults and children after 12 years is enough to take 2 or 3 pills three times per day. If a child between 8 and 12 years old, he should be given one or two tabletochki three times a day. At the age of 3-7 years, enough three receptions on the tablet. If the kid from up to three years old - supposed to give half a tablet three times also. The treatment is usually two or three weeks, it determines the doctor. If the child does not want to swallow the tablets, they can be replaced laktofiltrum IVF pastilles or sachets. Sasha - this poroshochki that must be mixed with water to obtain a homogeneous slurry having a taste of peach.

You can not eat when the stomach Laktofiltrumor intestinal bleeding, intestinal obstruction, galactosemia, or in the case of individual intolerance. the drug is not administered at all When atony or exacerbations of ulcerative processes.

There are rare, but still our site warns readers are: bloating, diarrhea (diarrhea) Or, conversely, constipation, allergic reactions.

The emergence of abdominal pain or constipation may indicate an overdose, then stop taking the drug.

Often prescribed for complex Laktofiltrumtreatment of diseases with other drugs. In such cases, the principle of separation of reception, that is Laktofiltrum drink for an hour or two before or after other medications prescribed by your doctor. Sufficient data on the safety of use of funds during the gestation or lactation no child. Thus, only the doctor decides on the appropriateness of prescribing this drug to women in these periods of their lives. Special conditions laktofiltrum storage is not required, only the place should be inaccessible to small children.

Now readers of our site is clear how theLaktofiltrum. Its peculiarity is that it creates favorable conditions in the gut, so that it grew its own beneficial microorganisms. Gradually, their numbers are restored and maintained. Take care of your health, and if necessary, consult an experienced doctor.