medicine
by admin
Many people know that herbs beneficialaffect health, can get rid of the unpleasant symptoms of the disease, eliminate the cause. But it does not always have time to make infusions, decoctions, tinctures of medicinal plants. Today, our site will acquaint readers with Iberogast. This preparation is designed based on the plant, it is able to improve the condition of the gastrointestinal tract.

Familiar Are you such a feeling in my stomach when suddenly at the wrong time starts to hum, there is heaviness, distension, inflationaccompanied by an accumulation of gases in the intestines? The listed symptoms periodically occur in a third of the population. In such cases, the person has the impression that the eaten food accumulates in the intestine and is not digested. This also happens because of a violation of the motor activity (motility) of the digestive tract, then the relaxed, “choking” muscles of the stomach do not fulfill their functions, as a result of which fast transport of food that has arrived and has begun to be digested is impossible. And if the food remains undigested for a long time, does not enter the intestines for further breakdown, then heaviness occurs in the stomach. And gases and bloating appear during the course of chemical processes of decomposition. If the muscles of the stomach are relaxed, then this does not allow the stomach to stretch. 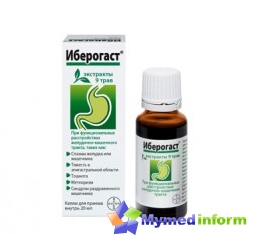 For more than 55 years in different countries of the world IberogastIt helps people to eliminate the symptoms associated with the problems of the stomach and intestines. The history of the drug began in the late 50-ies of the last century, when the scientific staff of the "Steigerwald" is actively engaged in research of medicinal herbs. As a result, they have created a combination of 9 herbs, which later formed the basis for herbal remedies, known as "Iberogast". And in 1960, Germany has been adjusted its release. Studies conducted from 1980 to 1986, showed that the drug dual action principle. That is, depending on the initial state of the gastrointestinal tract phytopreparation can on the one hand - to relax his muscles, and on the other - to improve their tone. Many studies have been conducted to prove that the drug is safe and well tolerated in patients. In subsequent years, we were able to identify new positive qualities Iberogast. For example, in 2001, it was found that Iberogast can reduce the production of hydrochloric acid, thereby preventing inflammation. Also, the drug helps stimulate the formation of a protective plyonochku on the gastric mucosa.

In 2003, researchers discovered the ability ofthis herbal complex act selectively. That is, the upper portion of the stomach relaxes it and the lower section, on the contrary, encourages. In recent years, Iberogast considered one of the most popular funds, purchased in Germany in case of problems with the stomach. Now this herbal medicine can be purchased in Russian pharmacies.

On the composition and medical action Before use, be sure to shake the bottle,as the storage solution sometimes becomes turbid or the bottom of the vial there is a small amount of precipitate. This is acceptable, the therapeutic properties of the drug is not impaired.

Drops Iberogast need to eat three times a daybefore a meal or during a meal. Otkapal into a glass, which previously poured a little boiled water, 20 drops from a bottle of medicine, and then drink. In most cases, the treatment lasts four weeks. Then, your doctor may recommend either continue this therapy, or take a break, and then carry out a second course to strengthen the effect. In the place where you keep Iberogast should should not be penetration of direct sunlight and the temperature does not exceed 25 ° C. Of course, it should be available for small children. 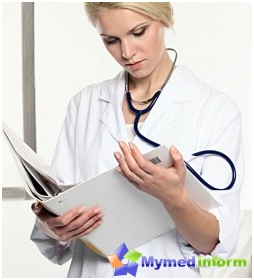 This tool is not administered to children and adolescents up to18 years old, this is due to the lack of clinical data. However, there is evidence that in Germany the data prescribed herbal drops even infants.

The drug contains alcohol, so the manufacturer warns that it should be used with caution in alcoholism, Traumatic brain injury, liver disease andbrain. The amount of ethanol in Iberogast from 29.5 to 32.6% -s. It turns out that a daily dose (60 phytopreparation drops) contains about 0.72 grams of ethanol. The amount is very small, so a person's ability to manage traffic or other complex mechanisms that require quick response, do not change.

Most patients tolerate the treatment Iberogast. Only in rare cases can give themselves known side effects such as:

If there were these phenomena, then stop taking this medication, tell your doctor about all.

Having a course of treatment with this herbal preparation, you can get rid of the unpleasant symptoms and problems associated with the digestive system.