The use of oxolinic ointment

medicine
by admin
From January to March, significantly increases the risk offlu or SARS. When around wheeze, sneeze and cough, you want to protect yourself and your family from infection. What people take in this situation?

When the media are beginning towarn the population that the flu sweeping through towns and villages, the ones listening to commercials on television and run to buy expensive influenza and immune-boosting drugs, others agree to the vaccine, and the third - partake of tangerines, apples or multivitamin complexes. Very well, if you put on in the summerstorage in the freezer raspberries, strawberries, sea buckthorn - Now is the time to make them tasty vitamin drinks. And you can brew potions from the fruits of mountain ash, wild rose, currants and ginger root ... Today, our site will acquaint readers with another reliable means able to prevent viral diseases. It is called a cheap tool - Oxolinic ointment. Package price in pharmacies ranged from 22 to 30 rubles.

How are infected with influenza? 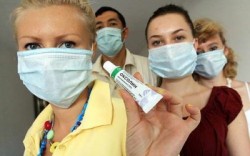 Worldwide, about 70% of the number of cases of communicable diseases account for cases flu. And the thing is that the flu virus hasthe ability to quickly engage a large number of people in the infectious process. This phenomenon is called a pandemic. Doctors have concluded that the virus is very contagious, that is, in simple terms - is contagious. From infected people, the virus quickly "jump" to a completely healthy. Therefore, every year and celebrated the influenza epidemic, usually it happens in late winter or early spring. And everything is compounded by the fact that representatives of the virus A, B are able to change, giving rise to a large number of variations of their fellows. Each new variation appeared unique, so our immune system first has to face with a stranger to her "outsider". Those viruses that cause disease in previous seasons, are recognized by our "guardians of order" quite easily and quickly, then immediately blocked. Infected can be anyone, regardless of age. But most of all cases occur in the first groups of children or the elderly. This is understandable - they have a weaker immune response. Once a person has flu, it immediately becomes a source of infection for the people around him - friends, co-workers, classmates, neighbors, companions in transport ... Even if the person's symptoms are mild, so-called latent form of the disease, it can infect anyone who contacts it. Transmitted dangerous viruses through the air currents. The greatest number of pathogenic viruses found in microscopic droplets of mucus, saliva, which inevitably go out when blowing the nose, sneezing, talking, coughing. The virus is very comfortable in the nasopharynx, nose, trachea, it is perfectly replicates in the upper and middle respiratory tract. Once on human mucous membranes, first a virus tries to adhere to the epithelial cells of the respiratory tract, as only then it is directly introduced into these cells. And once the virus manages to get inside, so it releases its ribonucleic acid (a genetic material), so it runs the process of reproduction. In one infected human cell can appear very quickly a million copies of the virus cells! Appeared viral cells rapidly infect other cells in the body. And with a special enzyme viral cells are able to recognize it is quite healthy human cells to infiltrate it there. So, in a few hours after being hit in the body, the virus craftily captures in its power all the respiratory tract. If the virus begins to multiply in the epithelial cells of the alveoli of human lungs, the disease is difficult, it can end in death. And if the virus manages to spread to other organs, it starts complications, such as meningitis, encephalitis, myocarditis ... When failed to establish the mechanisms of human infection with influenza virus, the pharmacologists began to create drugs that can protect people from mass infection in the season, outbreaks and epidemics. One such drug is Oxolinic ointment. Her drug inhibits viral attachment of cells to the epithelium lining the nasal mucosa, resulting in people not sick. 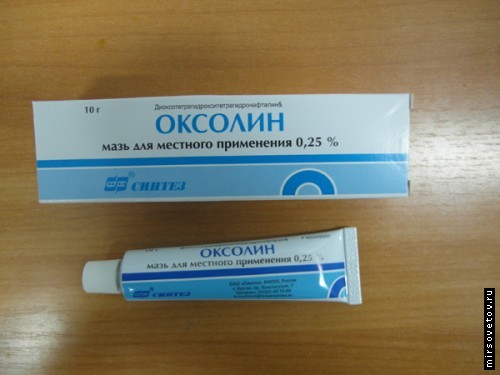 This ointment began to be used in medicalpractice for a long time, over the years it has worked well. Antiviral activity ointment gives the synthesized active substance - tetraksolin. Moreover, negative effects have ointment can not only on influenza viruses, but also on adenovirus and herpes simplex herpes. The task is to suppress tetraksolinaactivity of virus genetic material, thus stops viral replication and dissemination process of the respiratory tract, other organs, inflammation is suppressed. This effect doctors call virucidal. Ointment is used not only for the prevention of influenza, SARS and their treatment. To her resorted when viral lesions of the mucous membranes of the eyes (viral keratitis, keratoconjunctivitis), skin. For example, ointment is indicated for the treatment of herpes zoster, bubble, psoriasis, weeping dermatitis, dermatitis herpetiformis, molluscum contagiosum, warts. But then the percentage of the activesubstance will be greater. But let's get back to the ointment to help prevent the flu, the concentration of active ingredient in it is 0.25%. In addition tetraksolina it includes: petrolatum, paraffin oil and citric acid. Normally the ointment is white or slightly yellow. When stored may appear pink shade - it is quite acceptable. There was no odor in the ointment there. Toxic effect on the body when applied topically, it has not. Available in tubes of 30, 10 and 5 grams. Keep oxolinic ointment should be on access door of the refrigerator. The term of its storage - two years.

How to apply the ointment? 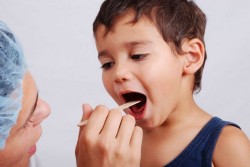 During the rise of the incidence of influenza, tosignificantly reduce the risk of infection, protect yourself from unpleasant symptoms, walking through the clinics, sick leave and spends a significant amount on treatment is not cheap medicines, lubricate twice daily nasal mucosa with this ointment. Such simple procedure should be followed from the nasal mucosa of their child and all home. This should be about 25 days. If you do not use the ointment, and someone from the family became ill, then immediately buy ointment to start preventive measures, because in your house there was a source of infection.

To treat viral rhinitis, apply the ointment three times a day on the inflamed nasal mucosa.

When viral lesions of the eyesdrug for eyelid lay one to three times a day, the last time it is better to do before going to sleep. Duration of treatment is determined by the ophthalmologist. Ointment in such cases is issued 0.25%.

When the forms listed earlier denying orshellfish, or take warts ointment 3% concentration, applied to the patients skin two to three times during the day. The treatment lasts from two weeks to two months, everything depends on the disease.

After application to the mucous membranes of the nose or eyes sometimes I feel a burning sensation, but it quickly disappears.

If you are sensitive to the detection of tetraksolinu ointment overturned. 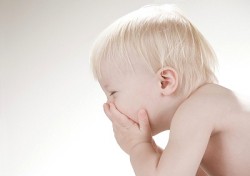 The ointment can be applied even to children, but if the child does not yet have two years, we should be more cautious and careful.

Doctors do not advise to apply simultaneously oxolinic ointment and Galazolin, Naphthyzinum or other vasoconstrictor drops, otherwise it may cause excessive dryness of the mucous membranes of the nasal passages.

During treatment, the eye oxolinic ointment do not wear contact lenses. If after three days of application of ointment eye condition does not improve, make sure you visit a doctor, so he changed the tactics of treatment or diagnosis is clarified.

Sometimes ointment issued to pregnant women if the doctor considers it necessary.

Our website recommends having readers home medicine cabinet Oxolinic ointment, it is dispensed from pharmacies without a prescription. Use it to prevent viral infections during seasonal epidemics.