medicine
by admin
Each pharmacy has a shelf and a showcase wherewide assortment of antibiotics. Most sick people, for whatever reasons, do not go to the doctor and buy medicines themselves. But what is needed antibiotic to the patient? And whether it is necessary?

Today our site has decided to tell his readers about one of today's antibiotics - Azithromycin, which is currentlyIt is available under different trade names. These drugs are very popular, many doctors are appointed. We will offer readers information on the properties, indications for use, admission rules, side effects of the drug and its synonyms.

Overview of azithromycin, in which drugs he enters

In general, the macrolide class of antibiotics appeared in1952. Then it was created by the founder of macrolides - Erythromycin. For many years it has been used successfully in the treatment of various diseases, but the medicine had to be applied several times a day, it is quickly destroyed in the body, and had a number of adverse effects, so researchers continued to create new antibiotics of this group, improving and perfecting them. Who created more than 20 of the macrolide antibacterial agents. Macrolides are divided into several subclasses. Pharmacology made restructuring of the drug, creating Azithromycin, which became the first representative of azalide subclass. After a number of clinical trials in 1988, the drug appeared on the world drug market, passed registration in Russia "Sumamed" under the brand name. Azithromycin is still part of the following drugs: Zitrolid, Hemomitsin, Zimaks, Z-factor Zitrotsin, Sumazid, Sumamoks, Sumametsin, Azitroks, azivok, Azitral, Azitrotsin ... All of these drugs are synonymous, since the active ingredient is the same. They differ only at the price and by the manufacturer.

Azithromycin synonyms and other antibioticsdistinguished by a broad spectrum of activity, the best results of the treatment, a single reception in the day, the smaller the likelihood of emergence of resistant strains of bacteria.

The most common form is administered orally, that is,used orally (by mouth) - capsules or film-coated tablets containing 500, 250 or 125 mg of active substance. On them and we'll talk in more detail. 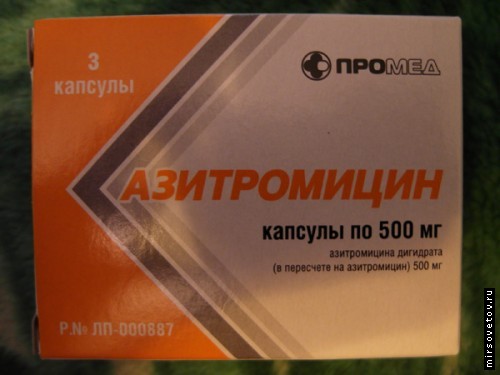 Azithromycin detrimental effect on sensitiveit pathogenic bacteria. It has a bacteriostatic effect, and if the concentration of the drug at the site of infection is high, the effect is bactericidal. Laboratory studies show that susceptible to the antibiotic of the number of gram-positive microorganisms: the different staphylococci, streptococci; of Gram: legionella, Neisseria, gardnerella, Moraxella, Bordetella, Campylobacter; anaerobes (Clostridium, peptostreptokokki), as well as mycoplasma, chlamydia, treponema, ureaplasma, Borrell, Shigella, Salmonella, Helicobacter. If detected, analyzed that gram-positive bacteria resistant to erythromycin, they show resistance and azithromycin.

Experience shows doctors that the drugIt is highly effective in the treatment of urogenital, respiratory and skin infections. After receiving the drug is rapidly absorbed without being destroyed in the acidic environment of the stomach, and is sent directly to the site of infection, where they accumulate and destroy bacteria pathogens inflammation. Therefore permitted a single reception of antibiotics per day. The drug is used 3 days (maximum duration of the course - 5 days), it is enough to destroy the infection, because the drug for a few days remain in the inflammation.

Installed anti-inflammatory and immunomodulatory effects, there is a mobilization of phagocytes and macrophage cells, are "soldiers" in our body and protects us from pathogenic microbes.

Azithromycin have significantly fewer side effects than other antibiotics.

Azithromycin is appropriate to prescribe in such diseases, pathogens which are sensitive to this macrolide. Doctors prescribe this medication for the following diseases:

The drug should not be used in severe renal or hepatic insufficiency, arrhythmias, Lactation, allergy orsensitivity to macrolides marked earlier. Tablets and capsules are not used in the treatment of children under the age of 12 years, for them there is another formulation - a nice suspension of banana, apple, strawberry flavor. Although side effects are rare, mymedinform.com will list and:

If the patient has no contraindications, thenAzithromycin can be used for treatment. Be sure to comply with all regulations and dose to avoid side effects. The capsule (or tablet) washed down with boiled water one hour before going to eat or 2 hours after a meal. Enough of taking the medicine per day.

Adults are infectious processesairway 500 mg daily for three days. That is, one package will be enough, in it you will find 3 capsules (or tablets). When inflammation or soft tissue of the skin on the first day to drink 2 capsules (each containing 500 mg of azithromycin), and the next 4 days take 1 capsule per day. That is a course required upakovochki 2 to 3 capsules. A similar scheme is receiving treatment at the initial stage of borreliosis (Lyme disease is).

At a stomach ulcer with the purpose of Helicobacter therapy administered azithromycin 3 days in a row by 1.0 grams per day.

In diseases of the urogenital should drink only 2 capsules, that is, 1.0 g of the drug once, in the days following the drug is no longer necessary.

When pneumonia (infection or pelvic) the first days of the drug into a vein, and after the doctor prescribes the capsules (or tablets), taking into account the patient's condition and the dynamics of the course of the disease.

Babies receiving circuit and calculates the dose pediatrician, they depend on the diagnosis and the small weight of the patient.

In appointing Azithromycin breastfeeding women, the question with the pediatrician about the time of translated grudnichka on artificial mixtures.

Pregnant women Azithromycin is prescribed only in cases of extreme necessity.

If you forget to take the time to the next dose, then try to do it as soon as possible. The next capsule (or tablet) according to the scheme should take 24 hours after.

Sometimes the treatment of azithromycin to a patient Moreprescribed antacids, such as Maalox, Almagel, Fosfalyugel. This is what happens when a peptic ulcer. In this case, the interval between receptions of Azithromycin and antacid should not be less than two hours.

our website warns his readers: if you are already taking any medicine to treat other diseases, then it will certainly inform your doctor, there are means that are incompatible with azithromycin, and the action of a number of drugs it can weaken or, conversely, to potentiate.

The result depends on the antibioticassigned to the drug. If the antibacterial agent is selected correctly, that is, it is active against the causative agent and take into account all contraindications, the treatment will be successful.