medicine
by admin
For the treatment of various purulent infections for many years used the drug Dioksidin. our site disassemble its advantages and disadvantages, will affect the scope of application. 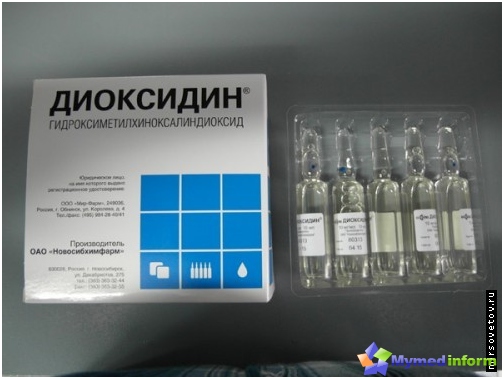 A drug was in Moscow, the All-UnionChemical-Pharmaceutical Research Institute, it is classified as derivatives of quinoxaline di-N-oxide. In 1976, he was allowed to be used in medical practice. Production of drugs involved only in the territory of the Russian Federation. Research dioksidina lasted 15 years, they have shown a wide range of antibiotic action. Available drug in a 0.5 and a 1% solution in vials containing 5 or 10 ml. Used topically, intracisternally or intravenously. This yellowish liquid that has no odor, but a bitter taste. Occurs 5% ointment, packaged in tubes or jars, 100, 50, 25, 30 grams. More Dioksidin part of the ointment called "Dioksikol" and antibacterial soap "effect."

What the properties of Dioksidin?

The drug is a synthetic antimicrobialmeans able to exert a bactericidal effect. Dioksidin selectively inhibits the formation of deoxyribonucleic acid (abbreviated as DNA) in cells of microorganisms, in no way affecting the formation of protein, ribonucleic acid (RNA). When this structure is disrupted microbial cell membranes. In the absence of drug efficacy oxygen further increases. This increased activity characteristic only quinoxaline derivative of di-N-oxide having antibacterial properties. Dioksidina succeed in the infected body to stimulate the formation of reactive oxygen species. In the treatment of burn and wound surfaces dioksidina there are no local irritation. The wound is cleaned very well, and then there is a better tissue repair. Most therapeutic efficacy of the drug is achieved in the destruction of anaerobes, which are sensitive to diatomic oxygen, they are called obligate. It destroys as aerobic bacteria, which are the originators of purulent infectious pathologies. Can treat shigellosis, salmonellosis, cholera, Pseudotuberculosis. Dioksidin research has shown that can destroy Gram-negative bacteria: Shigella, Salmonella, Neisseria, Escherichia coli, Vibrio cholerae, klepsiellu. Exhibit activity against meningococci, staphylococci, Streptococcus, Pseudomonas aeruginosa, Proteus vulgaris. In the drug found effective against the bacteria, which is considered the culprit tuberculosis, Call it tubercle bacillus. 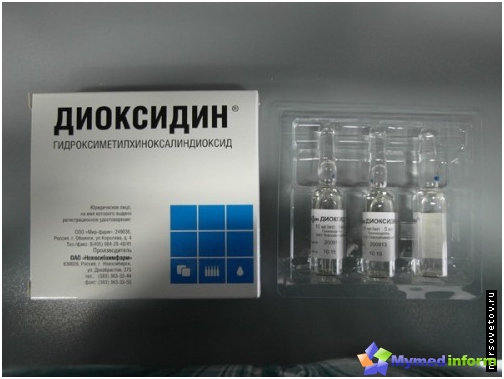 The drug is used in surgery (neurosurgery), dentistry, urology, otolaryngology in different types and forms of purulent infection. Diseases in which appointed Dioksidin:

It is injected into a vein only in inpatient facilities as a backup drug for severe infections or for the low effectiveness of other antibacterial drugs. 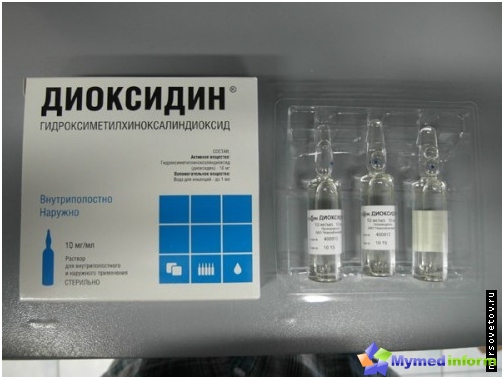 Topically, the drug is used in a concentration of 0.1-1%. If a small concentration is needed, then take an ampoule solution of 0.5 or 1% and dilute with isotonic sodium chloride solution (sterile) or water for injection (sold in pharmacies). Sterile wipes, previously moistened with a solution, are carefully applied to the wounds. If the wounds are deep, then sometimes they are loosely tamponed. If a drainage tube is present, then from 20 to 100 ml of the drug (0.5%) is injected into the infected cavity. Wounds with osteomyelitis are treated for 15 minutes, after which a bandage is applied, wetting the napkin in a stronger solution (1%). The ointment is applied to a wound surface cleansed of necrotic (dead) tissue and pus with a thin layer, and then a bandage is applied to this area. If the patient tolerates treatment well, then it lasts from 15 to 25 days. Inside the cavity, the drug is administered using a catheter, syringe or drainage tube - take from 10 to 50 ml of a solution in a concentration of 1%. The procedure is done once a day or two, if the medicine is well tolerated, then the treatment can last 3 weeks.

When the drug ENT doctor (or pediatrician)assigned to drip into the nose, it should do so. On the vial to make a special notch nail file, and then unpack it. Fill the clean pipette solution slightly (typically 0.5% concentration) in both nostrils and drip a required amount of drug. Before the procedure, the patient should blow his nose to nose cleansed of mucus and crusts and slightly tilt the head back - so the medicine gets into the nasal cavity and are well distributed there. The drug should be poured into a clean bottle with a lid for ease of use. Or instead use cotton wool cap and close it the hole in the cartridge. Store this medication in the refrigerator should be. Pull it out should be just before the instillation. Before instillation solution to be already at room temperature. In each nostril adults should make 3 droplets and children enough 1-2 drops three times a day. Treatment is continued for 3 to 7 days. Manufacturer instructions in writing, that the drug is only for adults, but for children it intranasally doctors prescribe - no harm, for many years the use of the negative effects were detected. Recently, it even for ease of use to produce steel in bottles of 10 ml, to which is attached a dropper, to bury in the nose or ears. 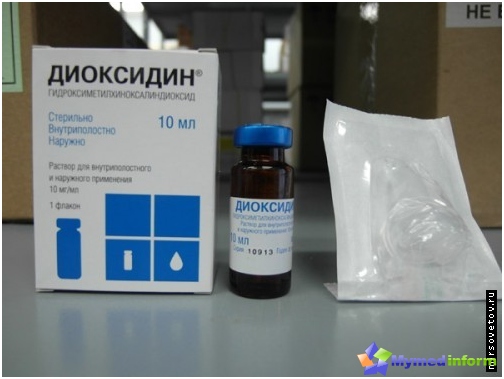 But this is administered intravenously onlyin hospital with a dropper under the supervision of a health professional. It requires strict compliance with dosage control analyzes. The drug gives good positive results, but it is toxic in excess dosage, so it belongs to the drugs reserve.

Sometimes crystals drop in solutionstored in a cool place, this is normal. Then the solution must be heated in a water bath, so that all crystals are dissolved. Occasional shaking speed up the process.

When administered intravenously into the body, the study identified a number of side effects:

Notwithstanding that adverse events have been reported in 8-10% of patients.

Good dioksidina advantage - is the absence of toxic effects on the kidneys, liver, ears.

I accumulated a lot of experience with the application of dioksidinavarious purulent infections, locally it is used frequently. But intracisternally or intravenously, due to the risk of overdose and the narrow therapeutic breadth of exposure, doctors prescribe it less often, since there are many other antibioticsSafer.