medicine
by admin
Again he tortured cough? Throat tickle and inside always something bubbling, but get rid of the attacks to bother fails in the bronchi or trachea? Release the airways of mucus accumulates in them will help Fluimucil, manufactured by the Swiss company "Zambon".

On the composition and the form of 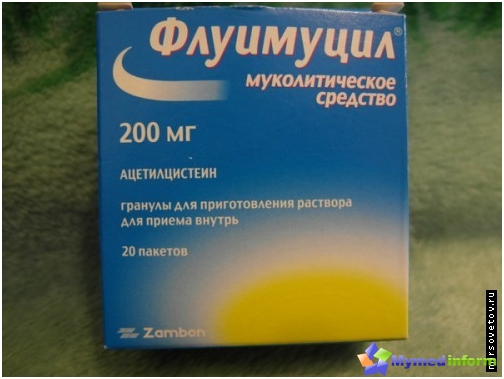 Fluimucil comes in several forms, in which the leading role played by acetylcysteine:

The active substance has a therapeuticaction in all these forms of release is acetylcysteine, has a strong mucolytic action. This substance is able to phlegm, increases its number, facilitates the evacuation of the respiratory tract. The sputum has acid mucopolysaccharides. A presence in the acetylcysteine ​​sulfhydryl groups actively contribute to breaking the disulfide bonds of the molecules of mucopolysaccharides phlegm, so it is diluted, it becomes less viscous, when a person is much easier to cough up. The drug is active, even if there is pus in the sputum. If Fluimutsilom treated, the patients suffering from chronic bronchitis, Various forms of cystic fibrosis decreasesthe number of exacerbations, and if they occur, then proceed to the lighter form. Sulfhydryl groups active substance Fluimucil manages to bind free radicals. In connection with this medication is often recommended to use in diseases which are characterized by the appearance in the respiratory system of a large number of condensed, viscous secretion. The active ingredient Fluimucil deftly penetrates the cells and protects them from various toxins and cytotoxic agents, acting as an antidote. Mucus is produced less viscous, less bacteria attach to the epithelial cells located on the bronchial mucosa. Fluimucil dilutes secret resulting in inflammation of upper respiratory tract.

When the drug is given?

Fluimucil advisable to take at such ailments when disrupted the normal passage of exudate (phlegm) from the respiratory tract, namely:

The drug helps to remove sticky secretions from the respiratory tract after injuries or operations. 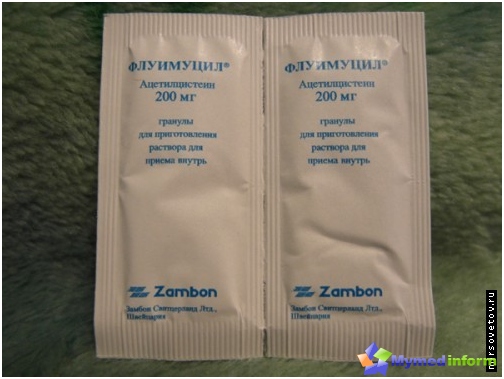 If you bought at the pharmacy Fluimucil bags, theopened one of them, you'll find it in white and yellow beads with orange highlights and a characteristic smell of sulfur and orange. Do not be afraid of the smell of sulfur, by dissolving the contents of the bag in the water and the liquid ingested, you do not even feel. Pour the granules from the sachet into a cup, pour to 80-100 ml of water, mix well with a wooden stick or glass. our website drew attention to the fact that no spoons, no other metal objects can not be used while stirring!

Adults and children who are already older than six years,usually advised to take medication twice or thrice a day with 200 mg of active substance. If the child is two to six, then the receiving circuit is as follows: 100 mg three times a day or at 200 mg twice a day. If the baby from one year to two, then it is sufficient to give 100 mg twice daily. Newborns give this medication only under the supervision of a pediatrician, which is sure to calculate the dose according to the weight of the child. Thus small children prepared solution allowed to drink from the bottle or using a spoon.

If you purchased effervescent tablets, then paynote that they contain 600 mg of active ingredient, so appointed only for adults and adolescents over the age of fourteen. They also must be dissolved before use into one-third cup of water, but to take only once a day.

In acute diseases course in the majority of cases it is five to ten days. But for chronic illnesses it can be extended for months.

whether side effects are possible?

Yes, unwanted effects, although rare, but still there are some patients. The manufacturer warns about the following possible side effects: 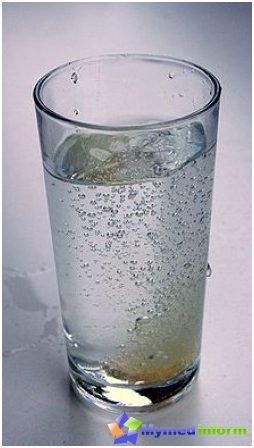 People with asthma when used Fluimucil should be controlled by your doctor because of the risk of bronchospasm, if it originated - the drug immediately overturned.

In hereditary fructose intolerance granular formulation is better not to eat, because when it is used the manufacture of sorbitol.

The decision as to whether to assign the tool pregnant or nursing women, takes only a doctor.

The drug should not be contact with metal or rubber products.

Light sulfur odor should not be considered an indication that the drug was spoiled, it is only a specific property of the active ingredient.

Cold preparations, used in the treatment of Fluimutsilom can cause stagnation of phlegm, because their action is aimed at, in order to suppress the cough reflex.

If you are assigned in addition Fluimucil antibioticsAs Ampicillin, Tetracycline, amphotericin, then at the same time they can not eat, only to meet the two-hour interval between receptions, or their activity will decrease.

If at the same time to take Nitroglycerine and Fluimucil, it is fraught with increased vasodilator and antiplatelet effects.

This tool is able to eliminate the harmful effects paracetamol.

In the case of use of activated carbon Fluimucil efficiency decreases.

Do not thin Fluimucil with other drugs in the same glass.

The medicine can be bought in pharmacies without a prescription online, it is effective, but still should consult a doctor, follow his recommendations. Have drug and synonym - it ACC.