Home>Other>The use of bee Podmore

The use of bee Podmore

Other
by admin
Tireless toiler bees give us not onlydelicious honey, flavored propolis, royal jelly, tender, sweet and sour pollen, bee venom, bee-bread, which have healing properties. Even after his life "winged healers" can benefit. our site offers a story about the bee subsea, which is used for many years not only in folk medicine, but also the official.

Podmore - what is it? 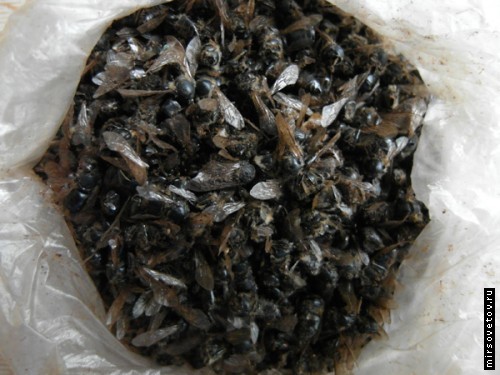 Podmore bees called dead body. "Age" of the working bees in the summer is short - from 35 to 40 days, and during the winter - about 9 months. Dead bees usually accumulate at the bottom of the hive, or next to him when podstelit oilcloth or cardboard.

Good Podmore should be clean, with no signsmold and decay. Properly dried Podmore has a specific smell. Some say that he is a sweet, slightly similar to the scent of dried fish, other - compare him with the smell of fried pancake crust or roasted seeds. And many say that it is slightly similar to the smell of dry cat food or vitamins for them. So I hold the same opinion.

The most valuable Podmore - summer or autumn, because inthis time, a huge amount of nutrients accumulated in Taurus bees. In the summer months there is a possibility of bees fed with fresh pollen and nectar, they are more energetic and healthier.

The greatest number of dead bees, beekeepersspring show at the bottom of their hives when embarking on their cleaning. But this winter (or spring) Podmore valued less, because there are a lot of impurities, and in the bodies of the bees for many months accumulated concretions. Such Podmore used primarily for outdoor purposes.

And one more a nuisance such Podmore - autumnMany beekeepers use spetspreparaty to save bees from mites. Podmore Drying is preferably carried out in an oven at a temperature of not more than 50 degrees. Keep it should be in a sealed box, a glass jar or a linen bag. Another storage option - in the freezer refrigerator. Podmore can buy from beekeepers, it is often sold on the honey fairs.

Properly dried bees body, crushed and in powder rastёrtye mass converted into a storehouse of medicinal substances. Revealed the presence of components of honey, royal jelly, pollen, poison, propolis, Wax - all this has a positiveeffects on organs and systems, getting inside the human body. The chitin shells of scientists identified chitosan complex pchelozan gave him the name, it is close in composition to human tissue. Bee venom is resistant to high temperatures during drying and continues to maintain its unique properties. More in bee subsea found:

When using products of bee Podmore manifest the following effects:

Good results were observed during the treatment:

How to use bee Podmore?

There are many ways to use thishealing agent. It can be dried in the oven, fry, turn in the loose powder mass, make a tincture, an alcohol extract, decoction, tincture, ointment, steam.

Correctly spent treatment can get rid of high blood pressure, dysbiosis, Pains in the joints, varicesImprove immunity and vision.

And now our site tells readers a few recipes with specific ailments. 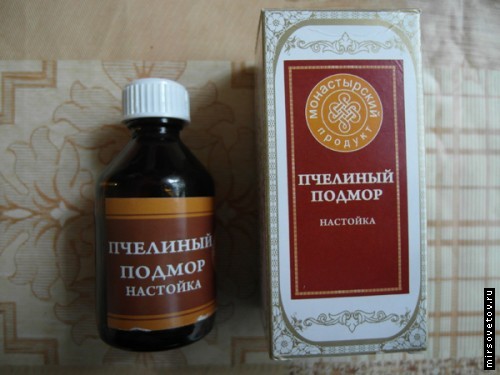 Perhaps the most common form of applicationIt can be called a tincture (alcoholic extract). She manages to buy on Orthodox fairs, where people come to the monasteries with their products, from beekeepers or make yourself at home. For this purpose, a glass of vodka taken one tablespoon dried minced Podmore (I usually take two spoons). Grind Podmore possible, using a mortar and pestle (tolkushkoy), for a smaller structure, I still raw then wipe through a sieve. Bank or leave the bottle for 3 weeks in a dark cupboard, shake every day for the first 7 days. In the days following infusion shaking already spend at least - after one or two days. After this period the infusion is filtered through two layers of thick bandage or gauze. Take three times a day, otkapyvaya in 100 ml of water and 20 droplets. The taste is pleasant, it is possible to enhance the positive effect of the glass add even a small spoonful of honey or a few drops of tincture of propolis. This dosage is for middle-aged people. But the older a day to drink as many drops, how old they are, dividing the number drops to two or three steps. If you weigh more than 60 kilograms, the number of drops should be increased - for every 10 kilograms more add on 7 drops. Even two months of receiving a positive impact on your health. In general, it is recommended throughout the year several times to repeat the courses receiving infusions. It is indicated in low immunity, heart disease, problems with the vessels of the brain, epilepsy, Eczema, psoriasis. myoma, A cyst on the ovary, impotence and frigidity. Miracle Elixir improves mood gradually normalize weight.

In diseases of the thyroid gland, especially in the detection of cystic formations and its sprawl, Podmore tincture is mixed with 10% propolis tincture, treatment goes on for three months.

The infusion can be rubbed bedtime for arthritis, radiculitis.

In parkinsonism or adenoma in men spendtreatment decoction. On a large spoon Podmore take 0.5 liters of water, boil everything on low heat for about an hour. Leave the room for 2 hours. Cooked means of strain using several layers of cheesecloth. Add the warm broth of a large spoonful of honey a good (kipreyny, lime or other). Keep the tool in a refrigerator shelf. First, it is necessary to take ten drops of the morning, as soon as the woke up. Gradually, within ten days, increase the dose to two tablespoons. The course of treatment should not be less than three months.

For outdoor use (rubbing atthrombophlebitis, pain in the muscles or joints) make a liniment: a tablespoon of crushed very well, rastёrtogo Podmore was mixed with 200 ml of sunflower or olive oil (necessarily hot). Keep this oily mixture should be refrigerated. Before using a small portion of molded and heated.

at mastitis. mastitis, Felon, varicose veins impose on patientssteam area. Prepare it as follows: Podmore pour hot water and leave for 10 minutes under the lid. The hot mass is drained, allowing the fluid to drain and then wrapped in gauze is applied to the surfaces of patients. Top steam harbor cellophane, and then an elastic bandage or a handkerchief. The procedure continues until the cooling of the medical supply.

Compresses steam help relieve jointpain, restore cartilage. At the same time beekeepers are advised to take a tincture or a decoction of Podmore, ambrosia. After a month of treatment, there is a break for three weeks, after which the course is resumed.

To improve the view is recommended to eat tea spoon of dry (or fried in sunflower oil) crushed Podmore twice a day. You can drink milk or water. Treatment lasts 60 days.

To Podmore was more effective in front oftreatment is desirable to clean the body, especially the intestines. When serious and prolonged illnesses are advised to reduce even the eating of meat products (especially fried, smoked), milk, yeast baking. It is best to carry out treatments during fasts.

About contraindications and warnings

Care should be someone who has a penchant forallergies to honey and other bee products. Do not take drugs Podmore children under three years of age and women, waiting for the appearance of the baby. If you use a tincture Podmore bees to lose weight, then during the course of treatment can not be hungry.